Do you want to play baseball?

How To Play Baseball?

If you want to know how to play baseball then you must have to know some basics about baseball. From this point of view we will teach you most of the basic knowledge here with very easy and smooth way. So if you can consent some of the minutes here we hope you will learn every major thing about baseball. Let’s start now-

Baseball is a wonderful game that is involved with the three words basically throwing, hitting, and catching. The professional game is usually composed of nine innings where the team with the highest run will be called as a winner. Every innings divided into two halves. The visiting team (players of the offense) bats in the first half of the innings and the home team (players of the defense) bats in the second half of the innings. If the two teams score the same run then they play the extra innings until one wins.

If you want to play baseball then you need these basic equipments:

If you want to know why Baseball is the best sport in America you can read our most researched content here.

The baseball field organized by two regions, infield and the other is the outfield. The infield consists of four bases and the outfield is just behind the bases from the home plate point. There are two territories named foul territory and fair territory. Foul territory is outside the foul lines which are set in the left and right side of the home plate. Fair territory is the area inside the foul lines consists of infield and outfield. When the batter hit the ball with a bat and the ball flies between these foul lines called a fair ball.

There are four bases on a baseball diamond. These bases form a diamond shape by starting from the home plate. Basically, the home plate is a starting base where the batter must have to touch to score. The other three bases are First base, second base, shortstop and third base. These bases are 90 feet from each other in the professional baseball field.

These are the fundamental things about the baseball field that have to understand before playing.

Mechanism of the Games

Now let’s get closer into the mechanism of the game.

The number of Umpires, their Position & Duty

The home-plate umpire responsible for calls balls and strikes. Other umpires are calls fair or foul, safe or out from their own zone. A few others decisions like- ejections, time outs and bulks can made any of the umpires of the field.

A baseball game consists of two teams, each team has nine players. Those two teams are called -the offensive team and the defensive team

-and the defensive team (also called the fielding team or home team always has to ball).

The focus of the baseball game is-

–The pitcher (player of the defensive team) which main objective to pitching to the catcher without giving any chance to hit the ball by batter. The pitcher is the player who starts the game to throw a ball towards the home plate. The rules are called knickerbocker Rules by which is also a set of baseball rules in 1945.

–The batter (Player of the offensive team).Which primary objective to hit the pitch ball and collect the run. 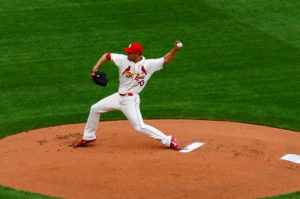 basically it’s called pitcher mound or pitcher plate. The rubber plate size is front-to-back 6 inches and across 2 feet (61 inches).The pitcher usually stands on a mound of dirt called pitcher’s mound, throws the ball towards the batter to hit it who stands on the home plate. 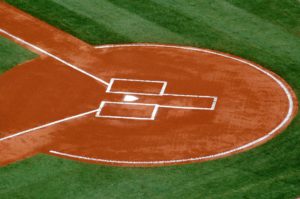 The batter is he who stands on the home plate facing pitcher to hit the ball by swinging the bat.

Before starting the game, the batting team chooses its lineup, which is a special order to arrange the batter. The batting lineup player stands on the batter box to get his turn to bat. This line up cannot be changed after beginning the innings. A new player can be altered with the original one. After getting out, the next batter comes to the field and tries to hit the ball that throw from the pitcher of the fielding team. The batting team always looking for getting run.

For getting run, a player must have to hit the ball and also have to become a base runner without being called out. A base runner is he who touches all the bases in order and touches the home plate at last without getting out by the defense team to score a run. After the ninth player of the batting line up or order batted, the first player of the line up starts again. One player can score only one for each time he bats.

The fielding team always prevents the batter from other teams to get hits or to score run. The defense team has seven fielders with a pitcher and a catcher. The pitcher throws the ball to the catcher in an effort to make the batter out. The catcher stands behind the batter’s home plate to catch the ball when the batter misses the hit.

Four infielders and three outfielders stand around the baseball field.

What Types Of Baseball Bat to Playing Baseball:

If you play baseball you must need a bat. There has lots of bat producer in the market.If you try the best baseball bats you may go Louisville,Rowling,DeMarini and Maurice brands.

If you want to know how to organize the baseman in the base then here are the base system.

In the modern baseball games outfielders plays important role in the defense. All three outfielders stay on the outfields of the field. They are primarily responsible to catch fly ball and ground balls a send back past to the infielders.

1 .Left fielder– the left fielder stands behind the third baseman and shortstop of the left side on the outfield.

2.Center fielder– the centre fielder stands behind the second base which is the centre of  the diamond.

The fielding team can shift the fielders at any time depending on the type of batter. As the intention of the defense team is to prevent the batters to get hits or to score run, they applied different defensive pitches. So it becomes too difficult for the batter to contact with the bat. The batter always has to keep eyes on the ball to decide where to hit.

There are many defensive ways to out the batter. If you try to understand how to play baseball, you have to familiar with how the batters out in the baseball.Let’s take a look at the type of baseball outs:

These are common types of out happened in baseball. Besides that there has some sort of out but it not occurs every match. That is why we don’t it here.

After recording the three outs, half of the innings will be finished. Then the two teams switch on the baseball field. The batting team starts to play defense and the defense team starts to bat for a scoring run. The winning team will be counted after nine innings. If the game is tied, another innings will be played until there is a winner.

These is the most basics tips to know how to play baseball.If you want to know our others guides about baseball you should concentrate our next story right in the blogs.

7 thoughts on “How To Play Baseball By Anyone? Best Basics Guides”